“No good poem, however confessional it may be, is just a self-expression. Who on earth would claim that the pearl expresses the oyster?” C. Day Lewis

Tearing Opals (above) by Christian Millet, one of over 20 featured artists currently coloring the virtual walls in Mad Swirl's eclectic electronic collective Mad Gallery. We know you'll wanna see mo' fo' sho' so move that mad mouse of yours right over here and a-way you'll GO

This last week in Mad Swirl's Poetry Forum... we encountered interrupted ingress, ice queen unmoved, us unwelcome; we pondered purim and poverty, scarcity of succour, all things distorted by the diatribe of a crazy motherfucker; we wielded weregasmic dog-breath whorls to wend vexed vampire bites into . . . something I forgot; we dispensed with defenses to discern a different disposition; we renewed our resolve to outlast an irresistable juvenile's, nubile journey, delightfully unsuccessful, in the end; we deferred to dog day definitions of death and light; we ultimately affirmed the efficacy of "Yes!" in this life and the next. Ah, so soft our sighs, our contentment; derived from these sweet strings of words! ~ mh

Just in case you missed it, here's a taste...

editor's note: Yes, maximized to the full extent of life; leaping with the angels. Yes, Eric, wherever you are! (And yes, Chris, we welcome you to our crazy congress of Contributing Poets with this one. More Zimmerly magic on his page, folks - check it out.) - mh

Rant from the Dog House

When did the globes become a problem show,
or any of the numerous other
back patting circles, quilting bees or shire slick
worshippings whittled in columns of clay?
The true ghosts must be begging,
hoarding hope at the hangar doors
of this studio necropolis.

Inside, manicurists, blind
attendants to the claws of kings,
rein in the growth of death.

“Enjoy it. Light a candle at the shrine
for me. This love of self must be a sin
or have I missed some irony?”

But I know, as I rest my snout
on the cold stone floor
of the cynic yard,
that the answer
is yes.

glorious in her brutally bourgeoning sex
and casual in its cruel manipulation.

Had her hands on the glans of creation;
she could squeeze semen from a stone.
Given longer, I'd have fallen to the pavement
in sweat and salt and callow yen.

Fumbling, virginal,
jumping the starting-pistol,
yet she still loved me.
For three weeks.

Ventured over the tracks till four a.m.
night after night, driving drunk
on adrenaline and testosterone.
Eight Mile. The Boondocks.
Bridge into the Badlands of South Auckland City.

Wander-lust dragged me nightly
by the scrawny adolescent neck
on a ballsy journey
that lasted longer than I did.

editor's note: Such sensual stimulus is more than enough to make premature capitulators of us all. Gotta build that resistance! - mh

Stand high
Be outspoken
Not that it’s the message
Behind the action
But that it’s worth being seen.

A willingness
(Only)
To travel a straight path
Across coarse
Unpredictable hills.

Laugh in the face
Of danger
Throw caution to the wind
The signs unheeded
Consequently
A surprise
Delivered
With defenses down.

editor's note: Yes! Get out early, but take the dog with you. Good dog! - mh

Releasing The Weird Taste Of Chewing On A Heart

The human race is lifelike. That's what makes it non-human.
A featureless slosh fed hard to become the evil twin booger,
booger-like, aired by surrounding satanic holes that shift together
closer to form a large coat. Soon the very air surrounding
the booger is too small. I'm allergic to the bio-engineered
pixels of the booger's tight unitard. I sneeze my mind out.
Nobody cares. The sneeze's vomit whiplash creates vibration
sounds. Let's call it jazz.

For it is sonically equivalent to the lakes of hollowness
that facilitate the armpit farts of, say, DNA in a can.
A canned vacancy supplanted my brainless ghost's cranium
with a plunger's unabated chug. The decomposition of
a ghost is a pretty impenetrable grid. A tiny bar of soap may be
made from an aborted ghost fetus, which is sad.
It's best to use the potato of safe sex. Bump against
that with your rubberized antlers. It's like electrocuting
fake leather, which can take the ginger pigment
out of one's laser. Forever leaving tracks in the gristle
of dead-sense luminescence. It's best to just fuck normally
then cannibalize the tiny soap until it tiredly breaks apart.

A werewolf's id rotates on a spit: its howl fizzles and says something
of the rancid mystery at the heart of the weregasm. Both pain reliever
and vascular dog breath whorl. A vampire vexed after
biting into memory foam. The fed mass's infinite yet
ill-fitting esophagus. Cushioning, but without connections
between its fearful cave and sunny altruistic leak. Biting into
it is like weaving a bridge while at the same time crossing it
and sedately grinning.

he was one crazy motherfucker

editor's note: It's a nasty human reaction, incited by "stoic pasties of rhetoric," screamed by "one crazy motherfucker." If we won't listen, they won't prevail... What? Did somebody say something? (Welcome, Steve Roberts, to our cool congress of Contributing Poets! See more of Steve's Madness on his new poetry page.) - mh

editor's note: Beware, Conquistadors! With this one, you will make no notch, but be notched - in her door. - mh

The whole Mad Swirl of everything to come keeps on keepin' on... now... now... NOW! Every second, every minute, every hour, every day, every week, every month, every year, every decade, every every EVERY there is! Wanna join in the poetic conversations going on in Mad Swirl's Poetry Forum? Then stop by whenever the mood strikes! We'll be here...

Graham Clements said…
I couldn't help but think of our recently disposed local member Sophie Mirabella when I read shut for business. Someone who was outspoken but totally inflexible and stubborn.
Friday, September 20, 2013 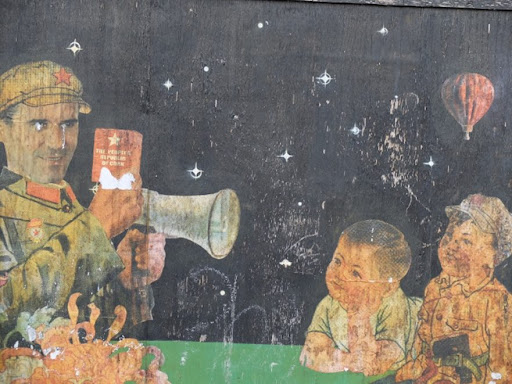